When we were planning our Altay trip, Vasily Porsev invited us to compete at the King of Asia extreme race, which he’s been organizing for couple years now. I found the event’s website, watched a video from the previous year, scared myself and tentatively filled out the registration form.

We just got back from our first multiday trip on the Karagem and Argut rivers to the event’s base camp on the Chuya river. I was slowly absorbing fresh experience and was so hyped that I hardly felt any fatigue. I had a quick dinner and managed to get some kayakers for an evening run on the women’s final course. After three days in a loaded boat I now only had to carry a throwback so I felt like flying over the waves and holes. I paid the registration fee and went to sleep. 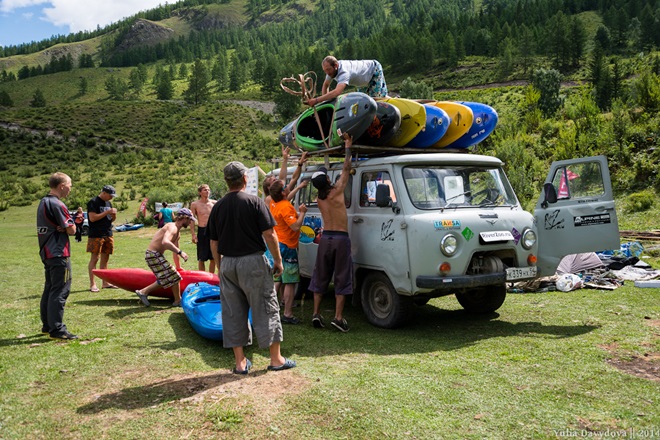 Next morning there was typical Russian chaos but in the end, more than fifty competitors and their support were ready some 15 kms downstream by an old wooden bridge, on the so-called Begemot section. Blue tent with bulls was already there, sound of electronic music coming from inside was mixing with sound of generator providing power for the event and there was a relaxed atmosphere all around. Although men’s roster for superfinal had been known since previous day, today, boatercross and chinese race winners would join the list today. 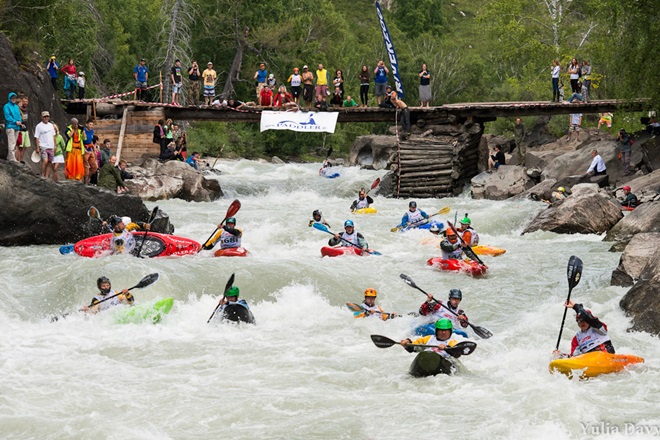 The day would start with women’s qualifications. Ten girls met at the start, some 100 meters above the bridge. Water level has dropped since last week and I slightly underestimated the first hole/wave called the Hippo. After a quick roll I got back on the line and reached the finish line, set some 150 metres below the last drop, with two minutes on the stopwatch. A UAZ was waiting there already to take us back for the second run. I really appretiated such a service as all the fatigue from the multi-day finally got me and I could barely walk straight. My second run was quite the same, just 5 seconds slower. I could only thing about going back to camp, eating a lot of food and sleeping. But finding out I was in the finals with the best time I was now full of energy. 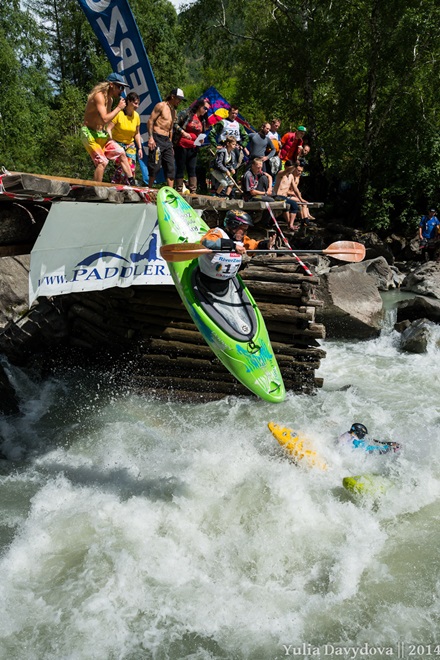 In the meantime, dramatic fights could be seen in the men’s boatercross, where four boaters at a time jumped from the bridge into the Hippo. Those who weren’t held by the Hippo, continued downstream through three staggered touch banners and spectators could watch many dramatic heats. I guess only Russian spectators can create a scene so loud. After a short break, first women’s heat prepared on the bridge. I was surprised that there was only a final touch banner but at least I could save some energy for tomorrow. I got lucky in the first heat to come fast out of the Hippo and got into the finish with a nice lead. Afterwards, there was a men’s semi-finals a then us girls brought our boats to the bridge once more for our finals. This time I didn’t manage to jump off the bridge so well, resurfaced facing upstream having to turn. By that time, Lucisa was already going away fast. Trying to go fast, I made another mistake, got caught by an eddy and barely got the second place. When we got back to the bridge, men’s final was already over, but spectacors were loudly cheering up special category – rubber doll VS rubber tortoise. That’s only a small piece of all the fun from the RiverZoo, this group of funny and friendly paddlers is really worth to travel to. Last event of the day was the Chinese race. I went to see the guys to study their tactics and the “kangaroo” style got me. Six of us girls lined up on the river bank and with the “Go” signal we ran to our boats. I performed just-learned jump with both legs straight into my boat which slid me into the current so I was already floating down while putting on my sprayskirt. The Hippo only slowed me down this time and once more I got to the finish line with a nice lead. 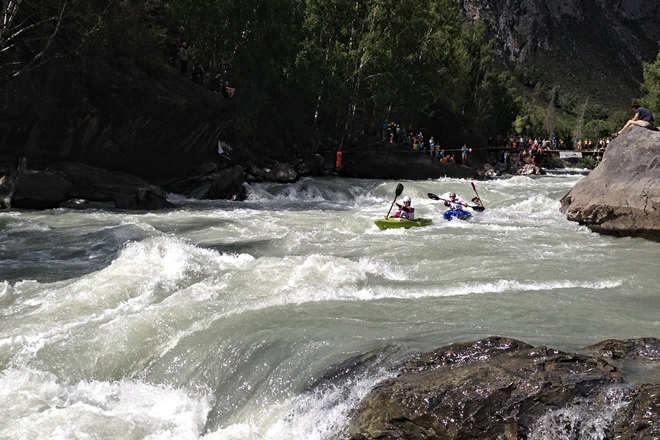 Second competition day was over and the next and final one took place in the lower Mazoy gorge. It begun with the men’s superfinals starting below the Presisidum rapid and finishing below the Roller Coaster rapid. Five of us girls waited anxiously at the Malish rapid. The hole looked stickier with less water, but I managed to avoid it only to hit the next hole into its meat. After a quick roll I hurried down towards following rapids. Second one went according to my plan but I forgot the line in the third one, the Zajsan. Got spinned at first hole and went backwards along the second one. Everything went so fast and I didn’t know where I am. Actually the line wasn’t that bad as I could easily make a ferry to the right and charge on through another smaller holes. I finished with a 30 second lead before Lucisa Holla of Slovakia and Alla Sidorova of Russia came third. Russians took all the medals in the men’s category. 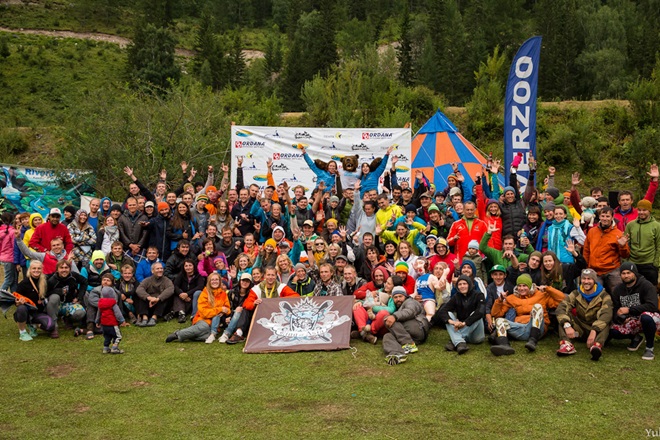 After a winners ceremony, delicious dinner – the traditional plow was served and afterwards a huge party with funny games begun. Participating in this great event was incredible experience long to remember for its cultural aspect but also for all great people who gathered here for the fifth time already. For more information about the King of Asia extreme race, visit the event website. 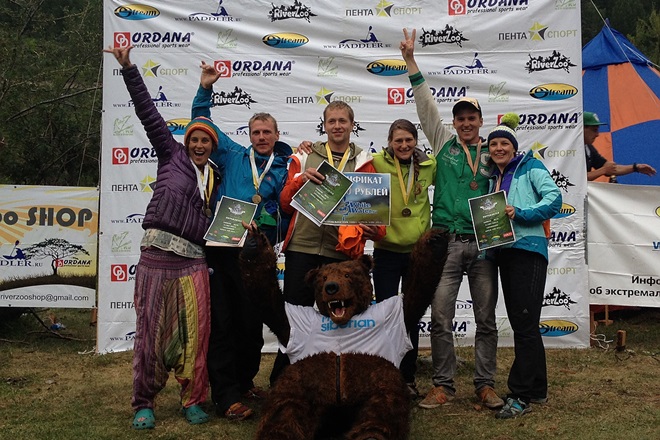