Our Altay journey is coming to an end and there’s one last multiday trip ahead of us. Sumulta river should have been our warm-up trip before we put on some harder stuff but this is Russia and the key is not to plan but to adapt.

Good thing is that the hike-in should be the most difficult part of it and once on the river, we will just relax and recover from the Lower Bashkaus, after which all four of us are pretty tired. Long long drive takes us from Chulyshman valley via Ulagan to the main road going from Mongolia through Altay Republic to Russia. Our exhausting ride takes whole day going north west nearly to Gorno-Altaysk and then back south east upstream along mighty Katun river. In the meantime, with help of our driver’s wife, we’re trying to book horses for the hike-in as uur guidebook mentions such a possibility and we would love to get to the river with some style. Unable to get any reliable information at all, we decide to give a try once we get there. Just before dark, we find a sandy camping spot by a nice wavetrain rapid, make some quick dinner and go to sleep.

Next day, we get to village of Edigan, trying to get the horses. It turns out that noone really wants to do that kind of business but instead of telling us straight, we’re hearing excuses that horses are afraid of boats, trail is too crooked and lot other things. Well, at least we tried. We do one last shopping (actually Tereza does it as no one else can speak Russian) and get moving again to get as far as we can by car. After about two another hours of driving and gaining some 1500 metres of altitude, we found ourselves on a damp meadow and it’s starting to rain. Its nearly 4 o’clock in the afternoon and we’re quite certain we won’t be able make the hike-in today. Austrian group hiked for 6 hours and we only have about 5 hour of light left. We quickly change, ration the food for 4 days, pack our boats and get moving. 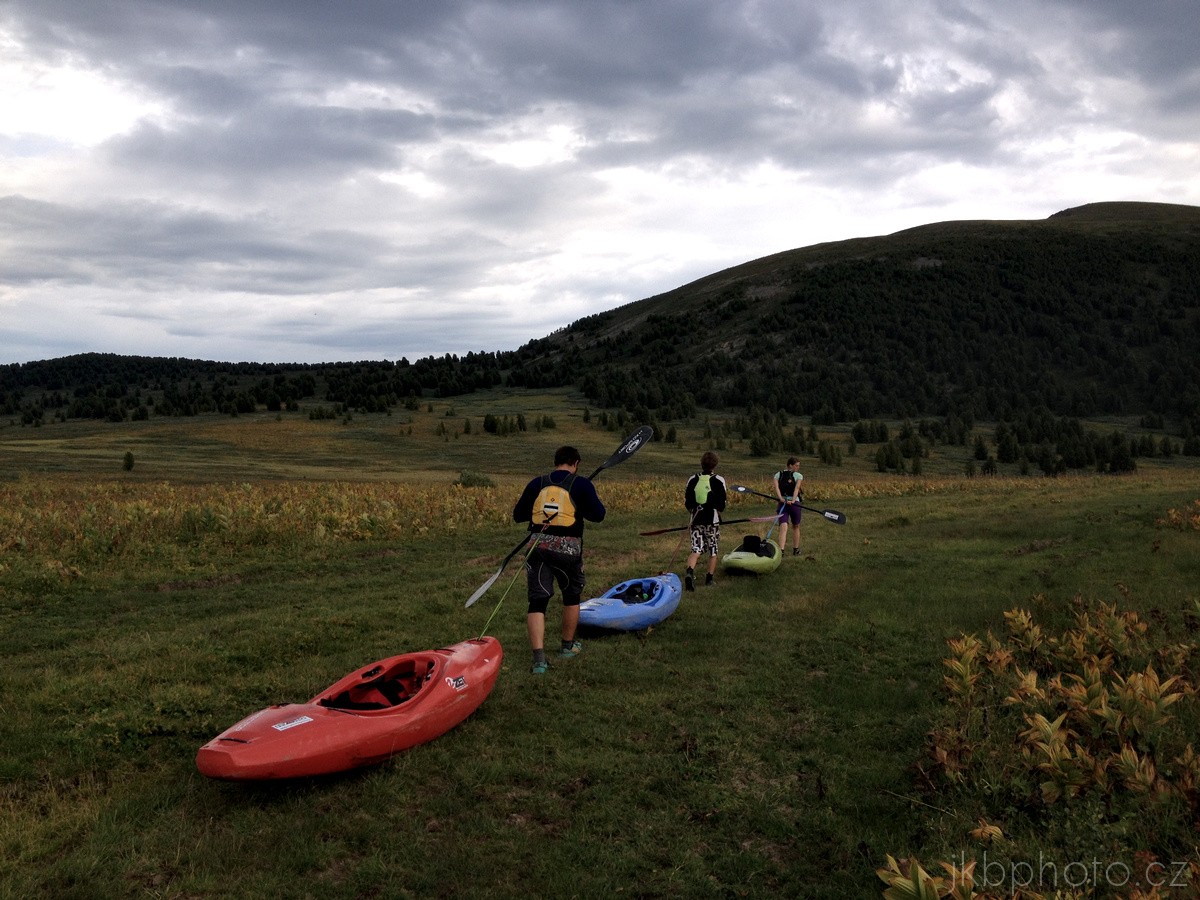 The only map we have in the car is 1:500 000 with no contour lines, so at least I took a photo of it. Sasha, our driver, says its easy, we should just stick to the track all the time and when the track dissapears, we go left. Apart from the fact that Sasha has never walked there, it really sounds easy enough. So we say goodbye and in slow but steady pace. we drag our boats towards next adventure. Before first hour passes, we’re already confused with the direction the track is going. According to the map, it should make turn betweek two distinct hills, but it keeps going too much to the south. At this scale, it’s hard to tell where we are on the map, but keeping ‘stick to the track’ in our minds, we keep going. In the next 2 hours, we reach several junctions and keep going but the track still goes more to the south than I’d like to. Meadows and forests take turns along the track and if there weren’t some bear tracks in the mud every once in a while, I’d think I’m hiking in Brdy near Prague. 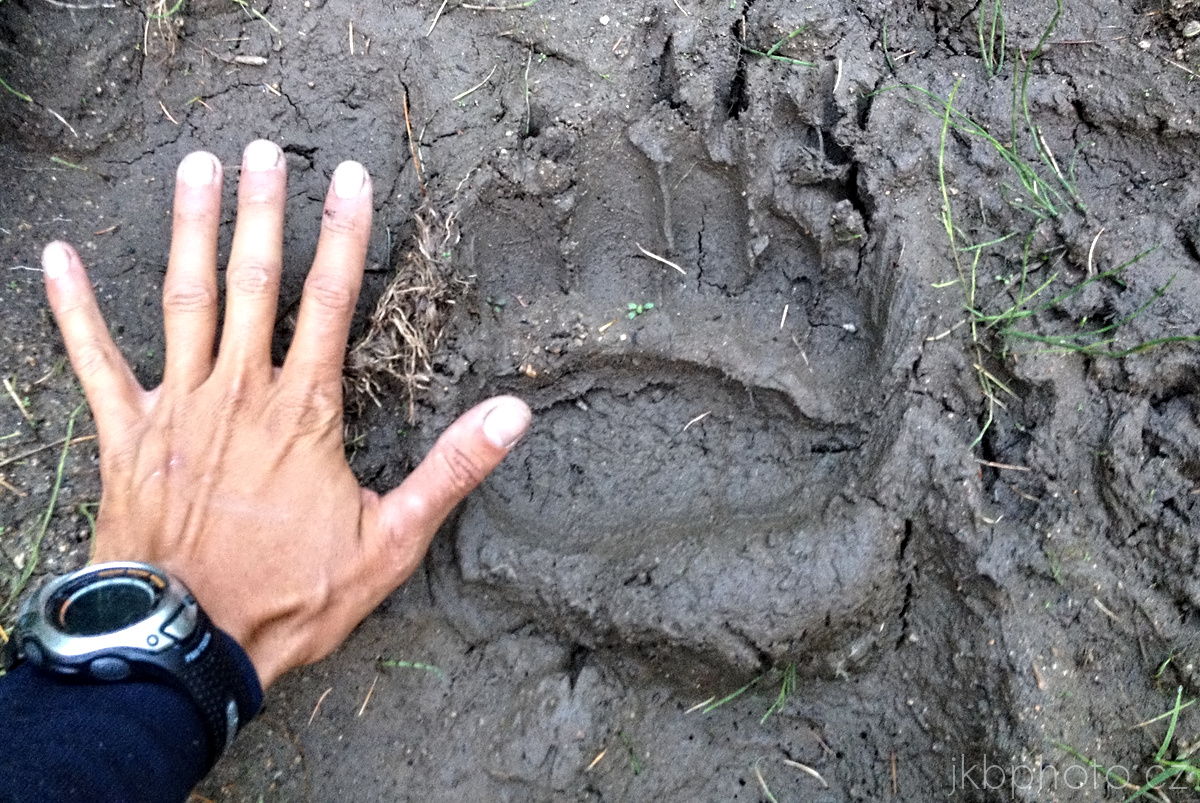 Sometimes the track goes uphill and we have to get on all four to keep the loaded boat moving, we’re all tired and sweaty but keep going with occassional short break to drink some water. After four hours of walking, we don’t really know if we’re getting close to the river of how much further we need to go. I’m quite sure that this is not the right track, but if we keep going, we’ll reach the river anyway. It’s only one hour of light left so we decide to take first good camping sport. We almost have no water left and there was no stream for last hour to replenish water supplies. It’s almost pitch black when we walk into an apparent camping spot, possibly used by hunters or tourists, we wouldn’t know. There’s so much garbage that it looks like a dump. Dozens of plastic bottles, empty booze, broken glass jars and a lot of various plastic packaging just lying there among the trees. During our trip we got the idea, how badly the ordinary people treat their environment, but this, in the middle of nowhere, was too much. We’re unable to find any source of water so in the end we go through leftovers in the plastic bottles we found here and collect enough to brew a cup of tea for each of us. The spirits are a bit gloomy as we sip our only cup of tea sitting around a small fire and try to dry our clothes soaked by sweat. No water means no dinner so we go to sleep and wonder how many hours of hiking there is for us tomorrow.

Lying under the tarp, I realize that the forest around us is creepy silent, the only sounds coming from our fire and snoring Peter. I’m not the only one to notice that and so Tereza keeps the fire burning the whole night as she’s scared of bears. Fortunately we have no visitors, the only distraction being distant gunshots followed by some dog barking.

We wake up early, thirsty and sore from the yesterday’s hike, but at least our socks have dried through the nigh (first hundred meters until the first big puddle blocked our way were good). The track keeps going and we can now clearly see a valley maybe some 5 kilometers ahead. High grass on the meadows we cross gives us hard time dragging our boats and our progress is slower than yesterday. We still have no water. The sky is clear and the sun begins to shine. We keep pushing, knowing that we’re getting close the rivers. And then the track, wide enough for an offroad car, dissapears. Ok, so now we should go left. But who am I kidding, we’re completely somewhere else than we should be. Small stream trickes just below us so we finally drink some water and have a short break while eating blueberries. The terrain ahead of us drops towards a valley but there’s no visible path and with our heavy boats, we must choose wisely where to go. We decide to split for 20 minutes and search possible directions for a usable path. 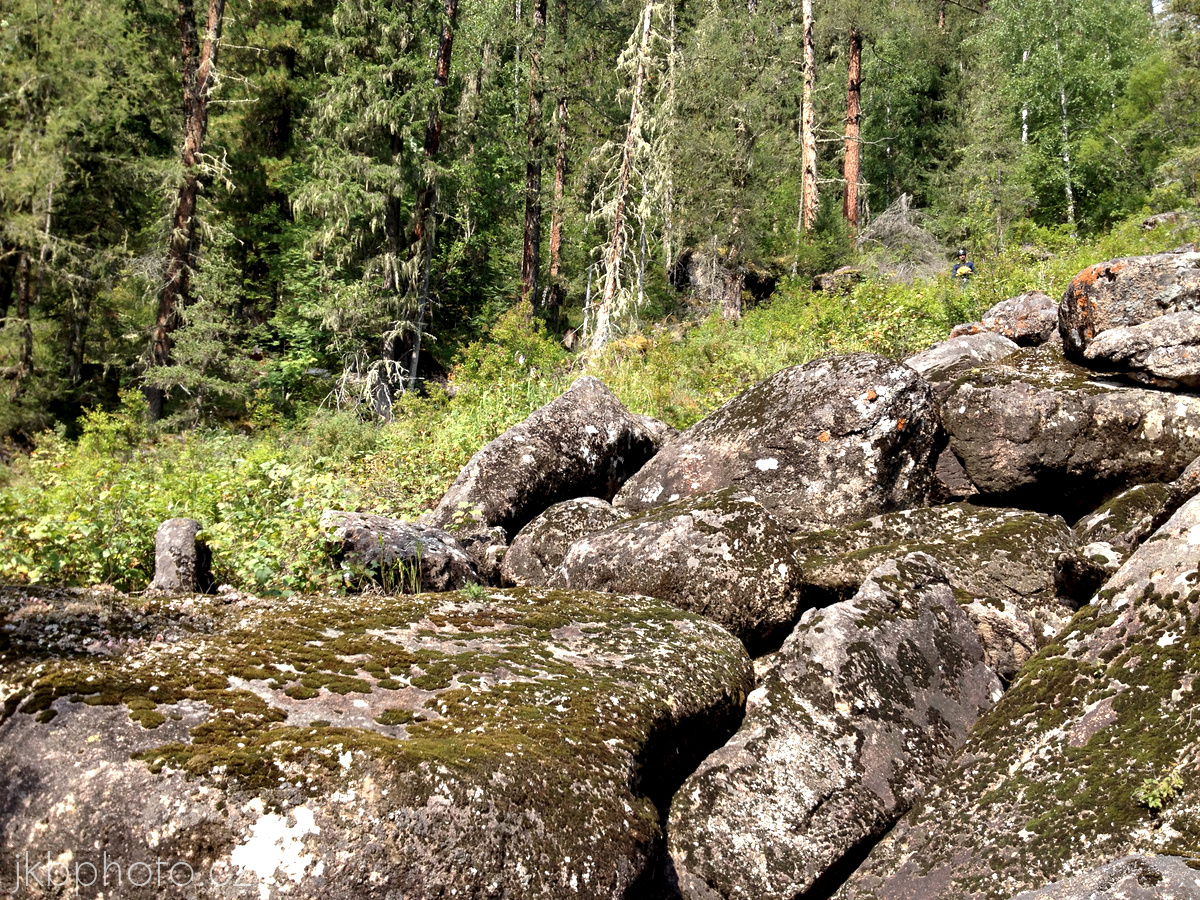 Tomas finds a small, possibly hunter’s path, following down the stream we just drinked from. It leads us through the last and the most strenuous part of the hike in. The gradient increases and we squeeze ourselves through bushes, cross steep scree and drag our heavy boats over rotting logs. After maybe two hours of this torture, Tomas shouts – “I can see the river!” and we know we made it. Shortly after, we’re naked in the river drinking its fresh water and washing our sweaty bodies. One meal makes-up for missed dinner and breakfast and at 2:30, we happily slide into the river in our boats. 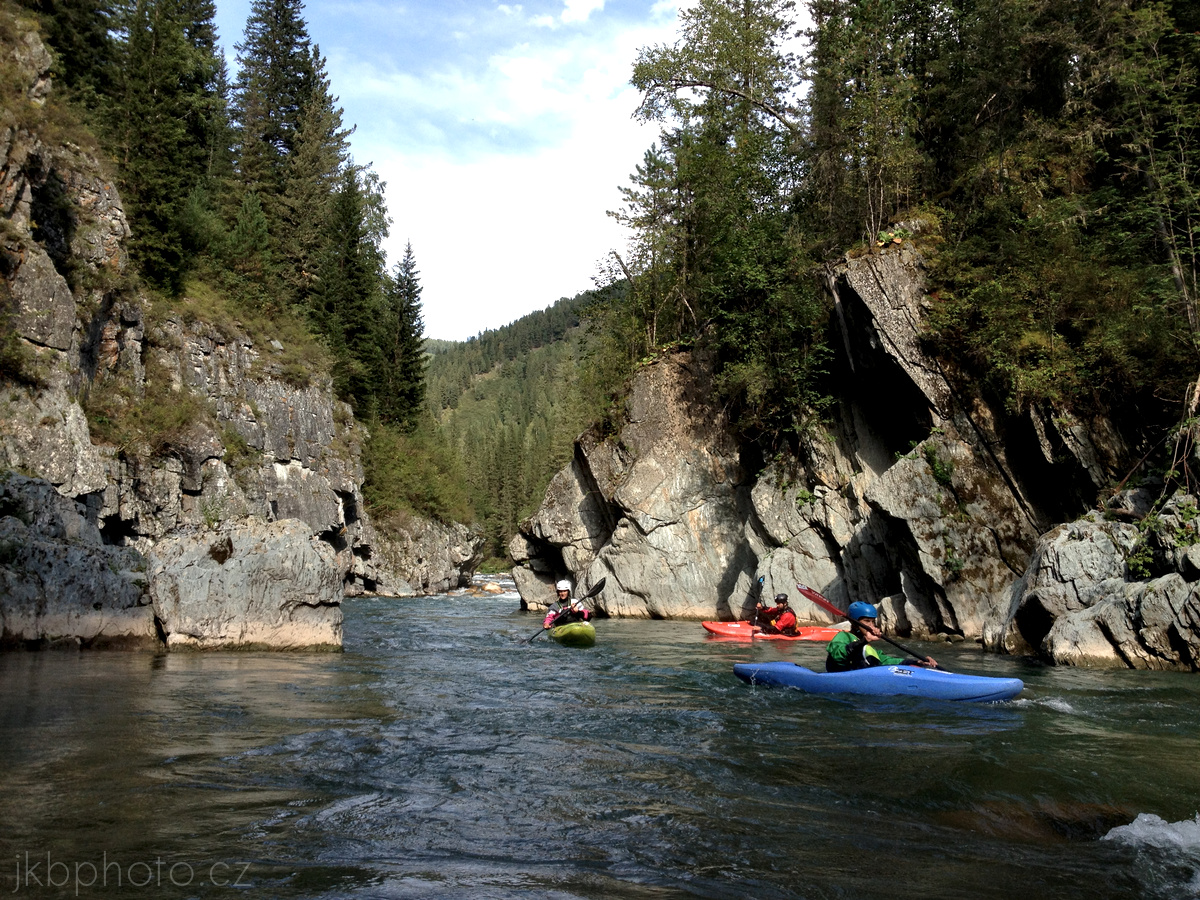 Apparently the level is low but manageable and we quickly bounce through some class 4 rapids on sight, enjoying every stroke of our paddles. Then the river eases to some class III and after another few kilometers, we take-out at a nice camping spot with a fireplace, which seems to be used frequetly. Our usual routine produces fire, tea, tarp, dinner and another tea. Suddenly we spot group of mounted men on the other side of the river, descending from the ridge and then crossing the river and coming to us. There are 4 men armed with rifles, 2 boys and 3 horses just carry some cargo. We briefly greet each other and they continue past the camp site some 30 metres into the woods. For a second, we feel bad for taking this nice spot for just 4 of us but then we hear a sound of a chainsaw and realize that these guys apparently came prepared. For another 2 hours, chainsaw won’t stop, they start a huge fire, catch a lot of fish, put up a really big tarp and seem like they’re gonna stay here for at least a week. Later we find out that they’re leaving next day, so I’m thinking about the Russian style and hope that they’ll take their garbage with them. Anyway, they’re friendly, we talk communicate briefly and get some fish, which is nice. 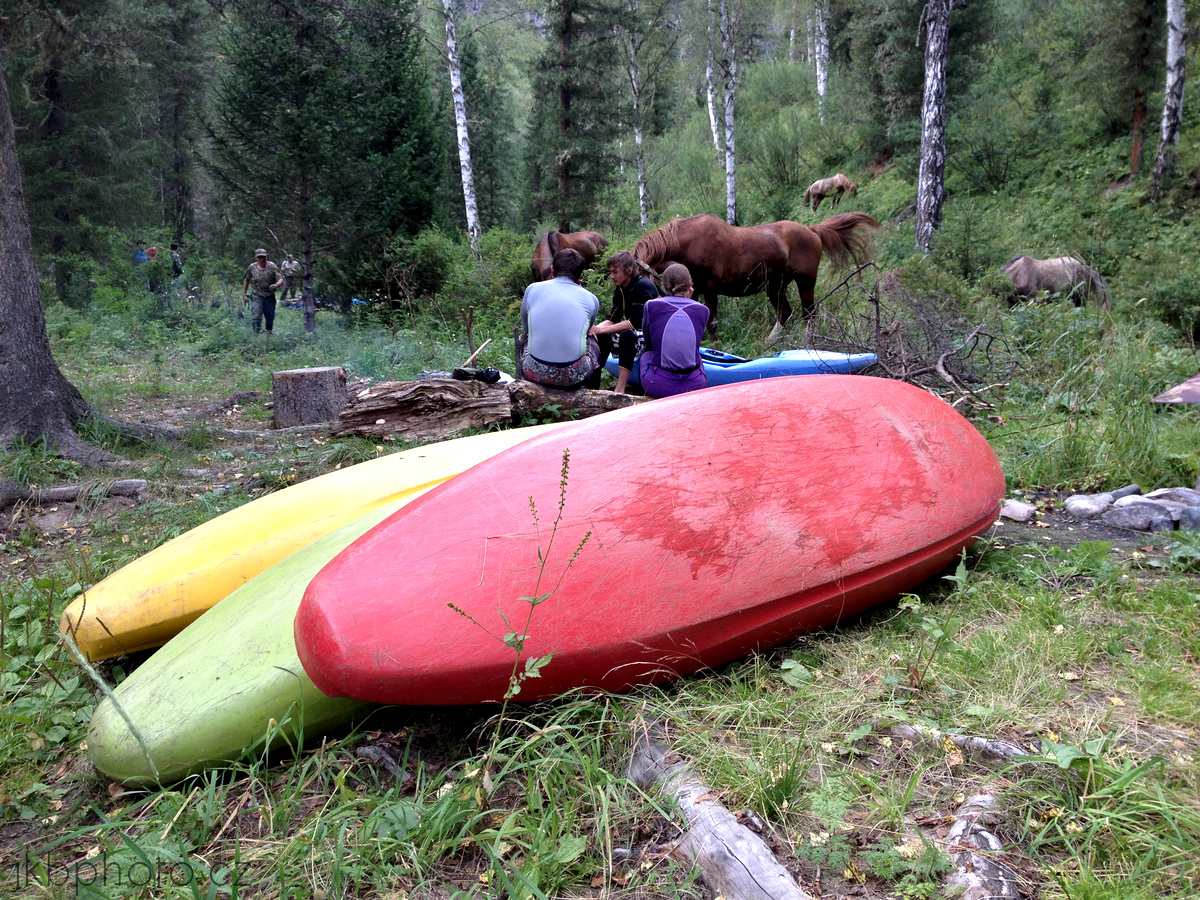 Next day, when we start to pack and change in our drysuits, our neighbours come over, curious about everything. They can’t believe we got here by foot and seem to be quite impressed by that and even more by Tereza as a girl. We say goodbye and continue our journey on the river. It’s nice class 2-3 with the biggest highlight being a huge log jam, some 1km long. Luckily, we manage to find an alternate route through the forest where the river’s diverted with only couple portages. 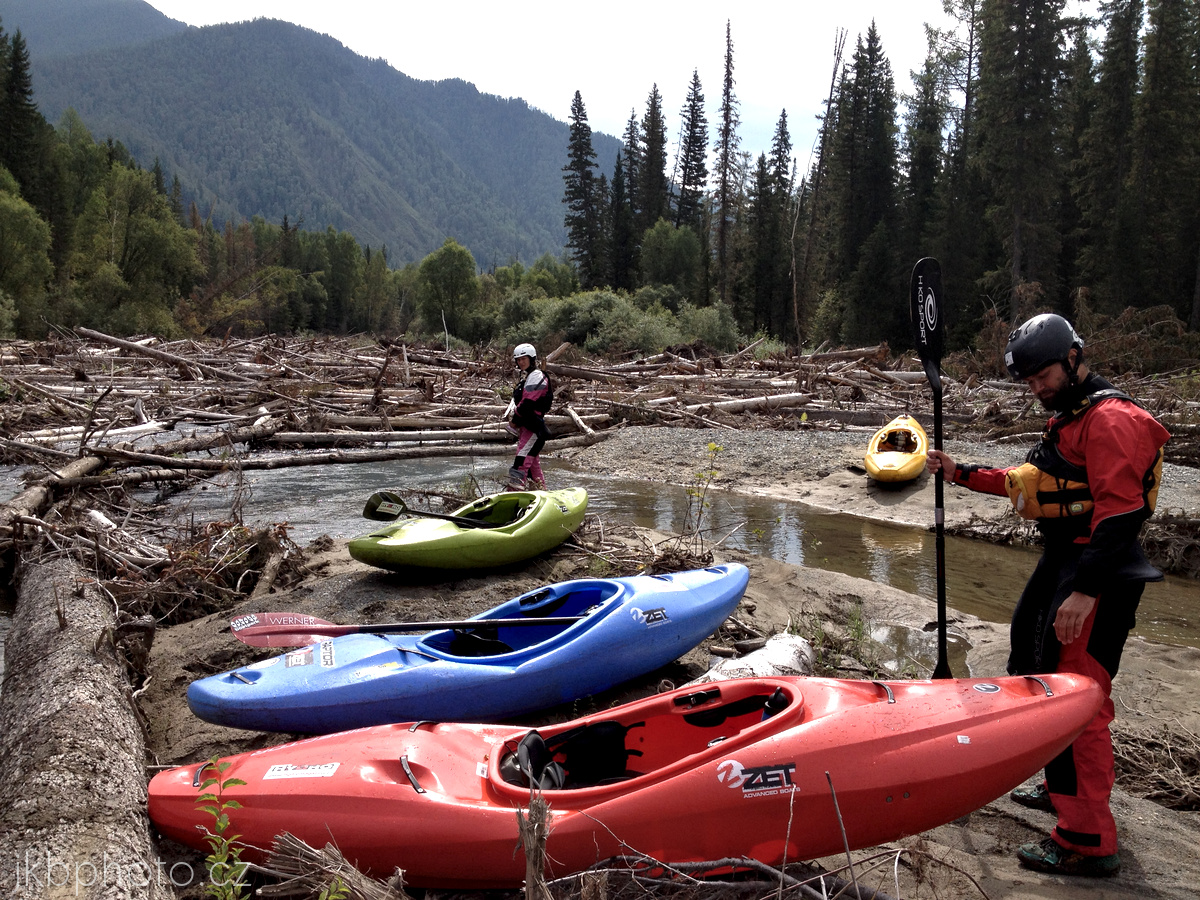 Then we reach a cofluence with Greater Sumulta and work our way through some of the class 5, which immediately follows the confluence. From there on river goes fast towards Katun confluence, it starts to rain and it’s cold with an overcast sky and every bigger wave is very unpleasant. After some scouting, we finally find a convenient camping spot and start a big fire to get warm. After a tea and dinner, there’s still a lot of time before dark and it keeps raining, so we find an ultimate solution for rainy evenings by making huge bonfire and taking our clothes off. Last day we wake up into a rainy morning. In one hand, no one wants to get up, but we know there’s some 6 hours of paddling ahead of us. Tea, poridge, packing and we’re floating down the river again. After a few river bends, we reach conlfuence with the mighty Katun, spot Putin’s ‘cottage’ on the other side of the river and let the power of the river drag us further. Next 4 hours feel like an eternity, every river bend reveals another one, we’re hungry and tired. Stopping to paddle just means being hungry for longer time so we mechanicaly paddle forward, noticing first signs of civilization: cows, wooden pen, transmitter on a distant hill, and finally a road and some houses. Finally, we reach the sandy campspot where we slept 3 days ago. Our car is not here, but we’re already used to that. This is Russia. We’ll start a fire and wait for someone to pick us up.